The Forty-Third James Edwin Savage Lecture in the Renaissance: “Is the Early in Early Modern the same as Early in Early Colonial?” by Ania Loomba. April 16th at 7p.m. Bondurant Auditorium 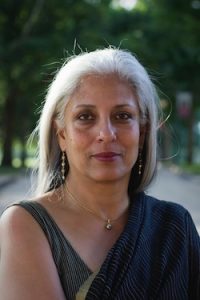 Ania Loomba is Professor of English at the University of Pennsylvania.  She received her BA (Hons.), M. A., and M. Phil. degrees from the University of Delhi, India, and her Ph. D. from the University of Sussex, UK. She researches and teaches early modern literature, histories of race and colonialism, postcolonial studies, feminist theory, and contemporary Indian literature and culture. She currently holds the Catherine Bryson Chair in the English department. She is also faculty in Comparative Literature, South Asian Studies, and Women’s Studies, and her courses are regularly cross-listed with these programs.

Her latest publications are a collection of essays South Asian Feminisms (co-edited with Ritty A. Lukose, Duke University Press, 2012) [http://southasianfeminisms.wordpress.com/] and a critical edition of Shakespeare’s Antony and Cleopatra (Norton, 2011) [http://books.wwnorton.com/books/Antony-and-Cleopatra/]

She is currently working on the lives of left-wing Indian women of the 1940s and 1950s, and co-editing (with Melissa Sanchez) Rethinking Feminism: Gender, Race and Sexuality in the Early Modern World.

The lecture will take place on April 16 at 7:00 p.m. in the Bondurant Auditorium.