The Edith Baine Lecture Series presents: “The Wild Not Less Than the Good: Thoreau, Sex, Biopower” 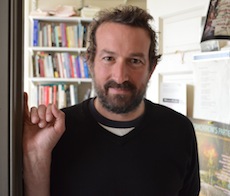 Peter Coviello is Professor of English at the University of Illinois-Chicago. He received his BA from Northwestern University in 1993, and his MA and PhD from Cornell. From 1998 to 2014 he taught at Bowdoin College, where he served as Chair of the departments of English, Africana Studies, and Gay and Lesbian Studies. He is the editor of Walt Whitman’s Memoranda During the War (Oxford 2004) and the author of Intimacy in America: Dreams of Affiliation in Antebellum Literature (Minnesota 2005) and of Tomorrow’s Parties: Sex and the Untimely in Nineteenth-Century America (NYU 2013), a finalist for a Lambda Literary Award in LGBT Studies. With Jared Hickman he co-edited a 2014 special issue of American Literature entitled “After the Postsecular.”

He has written about Walt Whitman, the history of sexuality, queer children, 18th- and 19th-century American literature, Mormon polygamy, stepparenthood, pop music, and much besides. This work has appeared in PMLA, American Literature, ELH, GLQ, and Raritan, as well as in venues like the LA Review of Books, Avidly, Frieze, and The Believer.

The Lecture will take place on March 26th at 7p.m at The Depot.  This event is free and open to the public.