Dr. Kullman, originally from New York, came to the University of Mississippi in 1984 after graduating from DePauw University (B.A.), the University of Chicago (M.A.), and the University of Kansas (M. Phil. and Ph.D.). As a scholar, he had an impressive research career. He authored and edited a number of academic books and articles on drama, theater, and early modern writing.

At the University of Mississippi, he was highly regarded by his students as an excellent and dedicated professor. In 1997 he was honored with the Elsie M. Hood Outstanding Teacher Award or his superior teaching. In 2018, he was included as the honoree for the Lori Sneed Council Scholarship Endowment in recognition of his outstanding mentorship to a past student, Lori Sneed. Despite the lasting impact he had on students, in an Ole Miss retirees feature interview he insisted on the irony of his teaching distinctions: “I have perhaps learned more from my students than they have from me.”

His colleagues in the English Department will remember him for the kindness and hospitality he brought to his teaching and community. One of those colleagues, Dr. Kate Lechler, recently wrote of him, “I edited his son Richard’s memoir and, in a gesture of thanks, Colby invited me and my family over to his house for dinner, showing us all his memorabilia and regaling us with stories from the English department and his years of studying literature. He made a really great butternut squash soup, too! I saw him a few years later […] and I was so honored that he remembered me and asked me how I was doing. Later, he emailed me pictures he had taken of me dancing at the wedding reception. He was a very sweet man.” 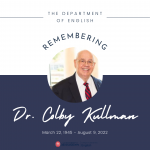