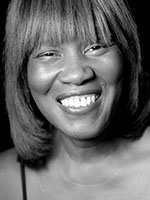 Patricia Smith has been called “a testament to the power of words to change lives.” She is the author of five books of poetry, including Shoulda Been Jimi Savannah (2012), which won the Lenore Marshall Prize from the Academy of American Poets; Blood Dazzler (2008), a chronicle of the human and environmental cost of Hurricane Katrina which was nominated for a National Book Award; and Teahouse of the Almighty, a 2005 National Poetry Series selection published by Coffee House Press. Her poems have been published in The Paris Review and TriQuarterly, as well as many anthologies, including American Voices, The Spoken Word Revolution, and The Oxford Anthology of African-American Poetry. Smith also penned the critically acclaimed history Africans in America (1999) and the award-winning children’s book Janna and the Kings (2003). Her biography of Harriet Tubman, Fixed on a Furious Star, is forthcoming.

A four-time individual champion on the National Poetry Slam, Smith has also been a featured poet on HBO’s Def Poetry Jam and has performed her work around the world. She has written and performed two one-woman plays, one of which was produced by Derek Walcott’s Trinidad Theater Workshop. She is a Cave Canem faculty member and has served as the Bruce McEver Chair in Writing at Georgia Tech University. She is currently a professor of English at CUNY/College of Staten Island and on faculty for the Stonecoast MFA program at the University of Southern Maine. In 2006, Smith was inducted into the International Literary Hall of Fame for Writers of African Descent.

The reading and signing will be on October 14th at 7p.m. in the Bondurant Auditorium.