Lindy Brady specializes in Old English, medieval Irish and Welsh, Old Norse, and Anglo-Latin languages and literatures. Her research interests include multilingual and transcultural approaches to the Middle Ages, the role of the landscape in literature, and representations of identity in medieval texts. Her first book, Writing the Welsh borderlands in Anglo-Saxon England, was published by Manchester University Press (2017), and her current book project is entitled Framing History in the British Isles: The Origin Legends of England, Ireland, Scotland and Wales. Other ongoing projects include a collection, Origin Legends in Medieval Europe, co-edited with Patrick Wadden for Brill’s Reading Medieval Sources series, and a series of editions and translations of late-medieval alchemical texts co-edited with Andrew Rabin. Lindy has been a Text Technologies Fellow at Stanford University in June 2015, the A. W. Mellon Postdoctoral Fellow in Medieval Studies in the Medieval Institute at the University of Notre Dame for the 2015-2016 academic year, and a British Academy Visiting Fellow at the University of Birmingham during the summer of 2018. She also reviews scholarship for the “Poetry” section of the “Year’s Work in Old English Studies” for the Old English Newsletter with Jordan Zweck, serves on the executive committee and as a delegate assembly representative for Celtic Studies at MLA, is the Celtic Studies book review editor for Speculum, and is a member of the International Advisory Board for the Richard Rawlinson Center for Anglo-Saxon Studies and Manuscript Research at Western Michigan University’s Medieval Institute. 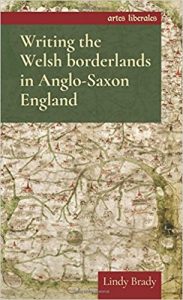 “Colonial Desire or Political Disengagement?: The Contested Landscape of Guthlac A,” Journal of English and Germanic Philology 115 (2016): 61-78.

“Apples on Willow Trees: a Metaphor for Grafting and Spiritual Succession in the Early Irish Saints’ Lives of Berach and Coemgen,” Proceedings of the Harvard Celtic Colloquium 31 (2012): 56-73.