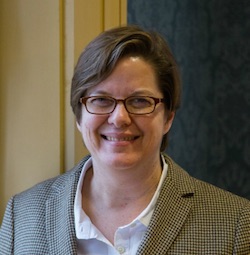 Jaime Harker is professor of English and the director of the Sarah Isom Center for Women and Gender Studies at the University of Mississippi, where she teaches American literature, LGBTQ literature, and gender studies. She has published essays on Japanese translation, popular women writers of the interwar period, Oprah’s book club, William Faulkner, Cold War gay literature, and women’s liberation and gay liberation literature. She is the author of America the Middlebrow: Women’s Novels, Progressivism, and Middlebrow Authorship Between the Wars and Middlebrow Queer: Christopher Isherwood in America, and the co-editor of The Oprah Affect: Critical Essays on Oprah’s Book Club, 1960s Gay Pulp Fiction: The Misplaced Heritage, This Book Is an Action: Feminist Print Culture and Activist Aesthetics, and Faulkner and Print Culture. Her third monograph, The Lesbian South: Southern Feminists, the Women in Print Movement, and the Queer Literary Canon, will be released in the fall of 2018 by the University of North Carolina Press.