Lindsey Yates: From the Classroom to the Film Set 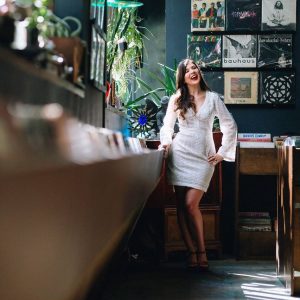 Lindsey Yates (B.A. 2012) uses her degree in Journalism and her minor in English in spectacular ways—literally. Working at the Los Angeles branch of the visual effects company, FuseFX, Yates has a hand in creating effects for many popular television shows, like 9-1-1 and The Orville, and films, such as the recent Netflix movie premiers, The Prom and The Boys in the Band.

Yates’s career journey is a testament to her drive and her passion, as well as her education. When she entered the university in 2008, the college had yet to establish its B.F.A. program in Film Production (which launched in the fall of 2018). Instead of giving up her dreams of working in film, she enrolled in the broadcast journalism program. After the university developed a cinema minor, Yates further honed her skills with classes focused on directing, producing, editing, and even shooting films.

Her English classes turned out to be the perfect complement to these media-centered courses. Yates notes that she uses the skills she developed as an English minor daily. She credits her minor in English for enhancing her writing skills, something she believes is a must in any field. “You can’t oversell the importance of writing a good email,” Yates says, stressing the value of clear communication in the business world.

Yates’s degree provided a basis for her eventual work in production, but the biggest step she took in the direction of her career happened in the spring and summer of 2011 when she participated in UM’s Internship Experience program. The program helps students identify and land summer internships in one of a few different cities, where program participants have a chance to live and socialize with other UM students in subsidized housing. In the semester prior to the summer internship, students learn how to write an effective resume as well as how to interview, budget, and network. Yates worked as a post-production intern for East Pleasant Pictures in New York City, an experience that enabled her to acquire hands-on knowledge of film production.

Following her internship and graduation in 2012, Yates moved back to New York City, eventually landing in 2015 at Los Angeles-based FuseFX, a creator of visual effects for popular tv shows and big-budget movies.

“I like chaos, so I wanted to move to LA to get into films and TV,” she quips. At FuseFX, the pace of work may not be chaotic, but it is fast. Yates’s recent credits include the upcoming show Julia on HBO Max, based on the life of Julia Childs, and Metal Lords, a Netflix movie from the creators of Game of Thrones, as well as a managing producer credit on the Disney+ show, Loki, based on the character from Marvel films.

Yates joined FuseFX as a Production Talent Manager, recruiting visual artists for the many television and film projects in FuseFX’s portfolio. Early in her tenure at the company, she paid it forward by establishing a six-week summer internship program that pairs the company’s talent with college students interested in gaining experience in the production of visual effects.

In early 2021, Yates transitioned to her present position as Managing Producer, supervising the company’s LA visual effects production department. In her position, she bids for television and film

projects after reading scripts and tallying up the potential costs of the effects. Once she has secured a new project for the company, Yates allocates production staff to complete it, supporting them through the visual effects production to ensure the client’s vision is met.

While most people think working in visual effects requires primarily technical and digital skills, Yates’s work at FuseFX requires interpersonal skills as well as the critical, creative, and time-management skills she honed at UM. Much of her time involves pouring over the scripts that she assigns to production teams, and at any given moment, she is involved with several projects at different stages of development. Currently, the company is working on thirty-five active television shows. However, Yates notes that this amount of varied work makes her job fun: “Who doesn’t like reading movie scripts all day?”

Yates is a strong advocate of the liberal arts. She argues that these majors are excellent preparation for a wide variety of careers. In her job, Yates notes that there is no set degree for a “visual effects producer,” but those with liberal arts degrees can successfully join the visual effects field because of their skills in reading, writing, and critical analysis.

During the Covid-19 pandemic, Yates transitioned from in-studio production work to virtual meetings to discuss the company’s projects. Even as many studios opened under strict guidelines, Yates was situated in front of her computer, “piling into Zoom boxes,” as she says.

As restrictions have started to lift across the country, Yates has begun to shift back to her pre-pandemic work life, although these days many of her meetings remain virtual. She feels fortunate to have continued to work during the pandemic, and she is happy that her company was able to continue to entertain people during a time when many were glued to their screens. She notes, “We may have not been saving the world, but it was important to bring joy to those stuck at home.”

With multiple new projects releasing this year, Yates’s desire to create joy for viewers remains unabated. She is excited for what’s to come.