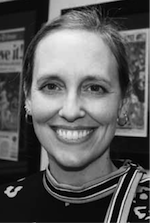 On Thursday, February 12th at 7pm, gender and Vietnam War historian Dr. Heather Stur (U. Southern Mississippi) will be delivering a special guest lecture talk on warfront images and portrayals of American and Vietnamese women who were on the front lines of the Vietnam War (1956-1975). Dr. Stur is the author of Beyond Combat: Women and Gender in the Vietnam War Era (Cambridge UP, 2011), a recent Fulbright Fellow (2013-2014; field research in Vietnam), and a fellow with the Dale Center for the Study of War and Society in Hattiesburg, MS. She is also an expert on the Cold War politics of the Asia Pacific region. Her interdisciplinary talk will be offered at 7pm in Bryant Hall 209 with a short reception and book sale to follow.

Heather Marie Stur, Ph.D. is associate professor of history at the University of Southern Mississippi, where she teaches courses on gender and war, U.S. foreign relations, the global Cold War, and the U.S. since 1945. Dr. Stur is a fellow in USM’s Dale Center for the Study of War & Society. She is the recipient of numerous awards and fellowships, including a Fulbright Fellowship to Vietnam, where she spent the 2013-14 academic year as a visiting professor in the Faculty of International Relations at the University of Social Sciences and Humanities in Ho Chi Minh City. During her Fulbright year in Vietnam, Dr. Stur conducted research at Vietnam’s National Archives Branch II and the General Sciences Library in Ho Chi Minh City, where she read political and military documents, letters, newspapers, magazines, and other materials for several forthcoming projects about the Republic of Vietnam (a.k.a. South Vietnam). Her first book, Beyond Combat: Women and Gender in the Vietnam War Era, was published by Cambridge University Press in 2011, and she is the author of numerous articles, including “Hiding Behind the Humanitarian Label: Refugees, Repatriates, and the Rebuilding of America’s Benevolent Image after the Vietnam War,” in Diplomatic History; “In Service and in Protest: Black Women and the Impact of the Vietnam War on American Society,” in Soul Soldiers: African Americans and the Vietnam Era; “Perfume and Lipstick in the Boonies: Red Cross SRAO and the Vietnam War,” in The Sixties: A Journal of History, Politics, and Culture; “Borderless Troubadour: Bob Dylan and the Music of the Cold War World,” in Highway 61 Revisited: Bob Dylan from Minnesota to the World; “The Women’s Army Corps Goes to Vietnam,” in America and the Vietnam War: Re-examining the Culture and History of a Generation; and “Finding Meaning in Manhood After the War: Gender and the Warrior Myth in Springsteen’s Vietnam War Songs,” in Dancing in the Dark: Bruce Springsteen, Cultural Studies, and the Runaway American Dream. Dr. Stur is currently working on two books, Saigon in the Sixties: Vietnamese, Americans, and the Culture of the Vietnam War and E-6 and the Coke Girl: A Story of Love Found and Lost in Vietnam. Dr. Stur is the director of USM’s Vietnam Summer Studies Program, a three-week study abroad trip in which students are immersed in Vietnamese history, politics, and culture. Dr. Stur holds a Ph.D. in history from the University of Wisconsin.