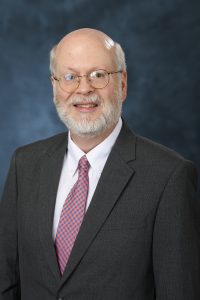 “I like writing jobs,” Dr. David Case says matter-of-factly, sitting in his third-floor office of the Robert Khayat Law Center, his desk piled neatly with stacks of papers he’s reading for a law review article he’s writing under a fast-approaching deadline. As a law professor, Dr. Case’s entire life is a series of “writing jobs,” for which he says his undergraduate degree in English at the University of Mississippi prepared him.

After packing his high school curriculum with as many English classes as were allowed, Dr. Case said that there was never a second thought to majoring in English in college. This was a decision he calls a “default setting,” in that he never considered another possibility. “I look back on it and it was the best decision I ever made.”

Case’s lifelong passion for language and literature started earlier than most- on his mother’s lap with a Bible. Before he started kindergarten, he was reading at grade level. “My father used to try and chase me out of the house because my nose was always in a book.”

That same love of books led him to law school. Unlike the times his dad told him to put down his books, this time he thought it was a great idea. “You never have to convince parents that going to law school is a good idea,” laughs Case, adding that his decision also bought him three more years at the university he loved so much.

After he completed his Juris Doctor from the University of Mississippi (1988), he eventually went on to receive his Masters of Law from Columbia University (1993) and a PhD from Vanderbilt University (2004), a path that enabled him to become an expert in environmental law and policy. During these years and prior to joining UM, Case held a variety of positions, including federal judicial clerk and trial attorney, eventually joining the law faculty at the University of Memphis. In 2007, he returned to UM’s School of Law as a faculty member.

Case fondly recalls his return to Oxford, particularly the first six weeks, before he had arranged for internet connection and cable at his new house. He had a lot of time to read, which he did, revisiting Faulkner’s novels as well as histories of the university, including former Chancellor Robert Khayat’s book, Education of a Lifetime. “I didn’t mind waiting for the wi-fi,” Case chuckles. In his current position as the Mississippi Defense Lawyers Association Distinguished Lecturer in Law, Case teaches environmental law, administrative law, contracts, property, and civil procedure. In addition to his teaching responsibilities, he publishes in the area of environmental law and management.

These days, those six weeks of offline bliss are a distant memory. Between writing and working with students, he finds himself perpetually energized and inspired and busy, much like his undergraduate days at UM. Case explains that a degree in English “doesn’t train you for one specific thing. It develops your whole mind and prepares you to think, analyze, and verbalize in a way that employers and disciplines across the board highly value.” He views English as a great foundation as well as a complement to more vocational tracks, such as accountancy or journalism. “Don’t try and hide in the English department like I did,” says Case, instead advocating for well-rounded English majors, explaining that “the more exposure to other disciplines the better; the broader your perspective and knowledge, the better you are as an English student.” Sounds like good advice to me.