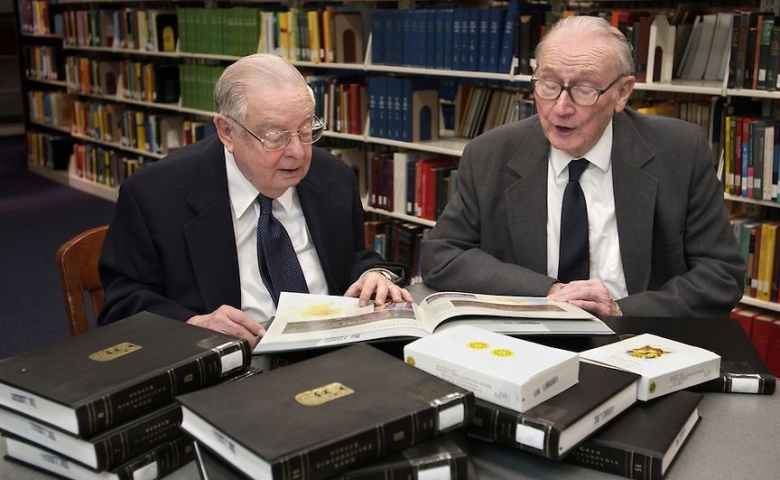 Chuck Noyes (right) and his close friend and colleague, John Pilkington, a senior professor of American literature, often worked together to strengthen the J.D. Williams Library.

“Dr. Noyes and I had a very professional and personal relationship while I was executive vice chancellor and he was my associate vice chancellor,” said Dr. Harvey Lewis. “His in-depth knowledge of the university and long years of managing the Friends of the Library membership and fundraising with Dr. John Pilkington (distinguished professor emeritus of English) were noteworthy.

“Di Ann and I grew to love Chuck and Ruthie (his wife), and we appreciate Chuck’s great sense of humor and ability to write!”

Dr. Di Ann Lewis earned her bachelor’s, master’s and doctoral degrees from Mississippi State University. She was director of special education, gifted and reading with Lafayette County Schools. Later, she joined Mississippi University for Women as an assistant professor of education. Additionally, she served eight years as executive director of Gear Up Mississippi with the Mississippi Institutions of Higher Learning.

The Lewises hope their gift to the Charles E. Noyes Library Endowment Fund will provide a steady stream of income that Library Dean Cecilia Botero can use to enhance the library’s collections and update its technology.

“Generous gifts such as this one allow the library to provide our students and faculty with exciting new resources that further advance their studies and research activities,” Botero said.

Noyes, a Natchez, Mississippi native, spent most of his youth in Memphis, Tennessee, where he attended Rozelle Grammar School and Central High School. He completed both bachelor’s and master’s degrees at the University of Missouri and earned a doctorate from the University of Texas. He was a member of the prestigious Phi Beta Kappa and Phi Kappa Phi honor societies.

Noyes served in the U.S. Army Air Corps from 1942 to 1946, attaining the rank of major. His service included the post of assistant chief of staff of the Third Army Airways Communications Wing, headquartered at Anchorage, Alaska.

Noyes, who passed away in 2008 at age 91, is widely credited with providing invaluable assistance within the UM administration during and after the university’s tumultuous integration in 1962, when he composed speeches for then-Chancellor J.D. Williams.

UM Chancellor Emeritus Robert Khayat described Noyes as being “among the most loved people at Ole Miss.”

“Chuck Noyes established extraordinary relationships with students, staff, faculty and alumni for more than 50 years,” Khayat said. “Blessed with a keen mind and a clever wit, he was known among his students for his life-enriching teaching style and within the community for his remarkable personal relationships. He devoted most of his retirement years to attracting financial support for the library. He was a bright, funny man who quietly gave most of his personal resources to the university. He will be missed and fondly remembered as a loyal son of the university.”

Noyes remained faithful to Ole Miss throughout his retirement years. In 2006, he notified UM officials that he had designated a bequest to benefit the university. He was a noted benefactor of the J.D. Williams Library and was for many years membership chair of the Friends of the Library.

The Ole Miss Alumni Association honored Noyes with membership in its Hall of Fame in 1991, and his former student David Arnold and his wife, Barbara, of Yazoo City, Mississippi, honored him by establishing the Noyes Library Endowment.

To make a gift to the Friends of the Library or the Charles E. Noyes Library Endowment Fund, send a check with the fund noted in the memo line to the University of Mississippi Foundation, 406 University Ave., Oxford, MS 38655; visit www.umfoundation.com/makeagift; or contact Angela Barlow Brown at 662-915-3181 or ambarlow@olemiss.edu.