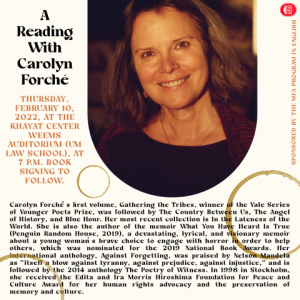 A reading with Carolyn Forche with book signing to follow. In-person event to be held Thursday, February 10, 2022 at 7pm at the Khayat Center on the University of Mississippi Oxford Campus.

Carolyn Forche’s first volume, Gathering the Tribes, winner of the Yale Series of Younger Poet’s Prize, was followed by The Country Between Us, The Angel of History, and Blue Hour. Her most recent collection is In The Lateness of World. She is also the author of the memoir What You Have Heard is True (Penguin Random House, 2019), a devastating, lyrical, and visionary memoir about a young woman’s brave choice yo engage with horror in order to help others, which was nominated for the 2019 National Book Awards. Her international anthology, Against Forgetting, was praised by Nelson Adela as :itself a blow against tyranny, against prejudice, against injustice.” as is followed by the 2014 anthology The Poetry of Witness. In 1998 in Stockholm, she received the Edita and Ira Morris Hiroshima Foundation for Peace and Culture Award for her human rights advocacy and the preservation of memory and culture.