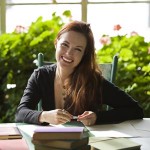 Beth Ann Fennelly was born in 1971 and grew up north of Chicago. In 1993 she received her B.A. magna cum laude from the University of Notre Dame. The following year, Fennelly taught English in a coal mining village on the Czech/Polish border, then returned to the States to earn her M.F.A. as a Lily Peter Fellow from the University of Arkansas. She spent a year at the University of Wisconsin’s Institute for Creative Writing as the Diane Middlebrook Fellow. After two years teaching at Knox College in Galesburg, IL, she moved to the University of Mississippi, where she’s a Professor. She’s won two teaching awards, the Liberal Arts Outstanding Teacher of the Year and the 2011 UM Humanities Teaching Award.

Fennelly has received grants from the National Endowment for the Arts, United States Artists, and the Illinois and Mississippi Arts Councils. She’s won a Pushcart, the Wood Award from The Carolina Quarterly and The Black Warrior Review Contest. She’s had residencies from the University of Arizona and MacDowell and fellowships from Sewanee and Bread Loaf. Her poems have been published in TriQuarterly, Shenandoah, APR, The Believer, The Georgia Review, Ploughshares, and Poetry Ireland Review, among others. She was the New Voices feature of The Kenyon Review with a critical introduction by Robert Hass. In 2002 she read at the Library of Congress. In 2009, she lived in Brazil on a Fulbright studying Elizabeth Bishop. She’s the first woman honored with the University of Notre Dame’s Distinguished Alumni in the Arts Award.

Fennelly’s poetry has been in over fifty anthologies, including Best American Poetry 1996, 2005, and 2006, The Book of Irish American Poetry from the Eighteenth Century to the Present, Poets of the New Century, and The Penguin Book of the Sonnet, and in textbooks such as Contemporary American Poetry and Literature. Her poetry books, all with W. W. Norton, are: Open House, 2002, a Book Sense Top Ten Pick and winner of prizes from The Kenyon Review and the GLCA; Tender Hooks, 2004, and Unmentionables, 2008.

Increasingly, Fennelly has turned to prose. A book of essays, Great With Child: Letters to a Young Mother, was published by Norton in 2006. Her essays on craft have appeared in The Writer’s Chronicle, Fourth Genre, Poets & Writers, and The American Poetry Review. Literary essays have appeared in The Black Warrior Review, The Michigan Quarterly Review, Ploughshares, Ecotone, and The Oxford American, where she’s a contributing editor. She writes freelance on travel, culture, and design for Garden and Gun, O an Oprah Magazine, and Country Living. The Society of American Travel Writers awarded her the Lowell Prize for her work in Southern Living. Her nonfiction been reprinted in Blurring the Boundaries: Exploring the Fringes of Creative Nonfiction, The Sundance Custom Reader, Creative Composition, and The Utne Reader.

In 2013, Fennelly and her husband, Tom Franklin, co-authored a novel, The Tilted World, published by HarperCollins and set during the 1927 flood of the Mississippi River. Translated into six languages, The Tilted World was an IndieNext Great Read; Southern Booksellers Association Okra Pick; 2013 LibraryReads pick; San Francisco Librarian’s Best Books of 2013 and Uncut Magazine’s Best Books of 2013.

Fennelly’s most recent book, published by W. W. Norton in October ‘17, is Heating & Cooling: 52 Micro-memoirs. The individual pieces of flash CNF have appeared in The Kenyon Review, The Southern Review, The Oxford American, Five Points, Creative Nonfiction, and elsewhere. In 2016, she won three essay prizes; the Orlando Award in Nonfiction from A Room of Her Own, the Lamar York Prize from The Chattachoochee Review and the Porter Fleming Award for Excellence in the Essay.

Fennelly and Franklin live in Oxford with their children, Anna Claire, Thomas and Nolan.