“You’ve seen this debate about sports. If the kid is into baseball, should they just play baseball year-round? Or is it better for them to take basketball or football so they can be more well-rounded?” 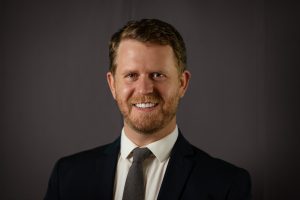 After graduating with a double-major in English & political science, Jarod Gregory worked as a political organizer for 1.5 years. He then went back to school and became a chemical/environmental engineer, earning his  degree from the University of Cincinnati. He has worked as an environmental consultant for 6.5 years and finds his diverse educational background and experiences extremely valuable in his work and life.

What are some of your favorite pieces of literature? / Are there any books that you are currently reading?

JAROD:I have three young boys: 0,3 and 6—so nothing that would be considered “literature” (laughter)

JAROD: When I have time to read now—it’s more about enjoyment. I don’t want it to feel like a job (like Hemingway or Faulkner). A job where you have to think about it or reference other things.

At times, I’ll pick up short books. Like on a flight. More recently, The Stranger and The Fall. Nice short books that are thought-provoking and quick reads.

My 6-year-old is old enough now to where we are reading Harry Potter together. We got the illustrated version!

JOSHUA :Is the illustrated version more pictures or all pictures?

JAROD: It’s got all of the same text from the book but just, a lot of pictures. As opposed to just the beginning-of-chapter illustrations. Almost every page has a little picture.

So that kind of stuff has been fun. He is old enough for me to loop back to Narnia and Harry Potter.

JOSHUA: Were there any texts during your time at UM that influenced you to switch to a liberal arts degree?

JAROD: Not really no, I mean, there is always the ethos of Faulkner and I enjoyed reading it there. I was in the honors program, and the general honors class, at the time, was honors 101— it got me interested in critical reading.

There was no big book that made me want to study literature— it was just interesting how we approached it.

What were some highlights from your time at UM? Any particular course or courses that stuck with you?

JAROD: There were two I could think of. One was an African Film Study Class (offered by the English program). There’s no way I can remember her name right now. She just did a really good job of helping us understand various things (that would eventually help with life or various careers) She would make us discuss questions like: Who is the narrator of a story? Who is the focal point of a scene and what does that mean? And why is the narrator for this specific scene and what do they know and not know?

I think in reading, and/or watching a movie, you learn to understand points of view. And this is not just important for understanding literature but for life, and work, and writing emails.

I also took a class called COLD WAR PARANOIA. We read some really silly books like The Incredible Shrinking Man. 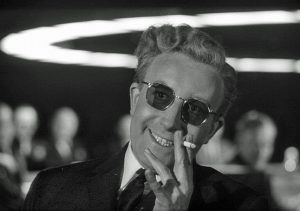 A still from the film, Doctor Strangelove or: How I Learned to Stop Worrying and Love the Bomb (1964)

It was so easily illustrative of what was happening in the world and how what you are being fed from life influences writing or movies. It was very eye opening.

That’s what always stuck with me— understanding all aspects of storytelling and how it relates beyond the story, like to conversations as a whole. Who are you talking to? Who is the audience? Who tells the story and what do they know or not know?

What made you want to work from being a political organizer to working as an environmental consultant?

JAROD: I did political organizing as something to do after school. At the time, I thought I would go to law school, then I changed my mind. I was the 1st generation of my family to go to college and I don’t think I knew a lot about engineering coming into school. I probably thought math and science were only relatable to being a doctor or pharmacist. Didn’t think about engineering or geology.

As you get older, you learn different things and meet different people. And I decided to go the engineering route rather than law school.

What were some particular skills that you learned from being in English classes that you think has helped you with your current job / overall life?

JAROD: Well, I am an environmental engineer/consultant so my job is, in a way, just customer-focused. With the customers being those who work in the environmental field usually at industrial facilities. Sometimes its regulatory agencies as the customer.

I think the liberal arts help with communication skills in general. That’s the easy, tangible stuff.

Beyond that, in work or life, it’s good to have that kind of perspective and thought that comes with being in liberal arts classes and having discussions. It made me a well-rounded person.

When I went back to school to join the expedited engineering program at The University of Cincinnati, I was six-ish years older than my classmates. So many engineering students would come in and we would have to take a couple electives— they would take something engineering focused. And the clubs they were in were engineering focused, and I would tell them that you gotta do something else cause you just come off as a robot!

In high school, you were probably in a robotics club! Go out in the world! Talk to someone! Get real-life experiences.

And obviously, all of that can’t be done from a class, but discussions that come from literature studies, film studies, the liberal arts in general, uses parts of the brain that you don’t use when you do engineering. You don’t want to become an adult and you sound like a walking robot person. If that’s what you want to do, that’s fine. But it also comes through at work and when communicating with coworkers and clients.

I always pitch myself as someone who has done a lot of good things and stupid things. I have been to a lot of places. Studied different things. I’ve done photography and written poetry.

You’ve seen this debate about sports. If the kid is into baseball, should they just play baseball year-round? Or is it better for them to take basketball or football so they can be more well-rounded?

I think it’s the same for a student and a person in school trying to grow into a real person and get into their career. You’ll never learn enough in school to come out and be ready for a job. You’re better off learning how to be a real person with original thoughts. That’s probably gonna serve you better than using what little time you have studying other types of engineering. Does that all make sense?

JOSHUA: I agree! I think English classes create more empathetic people. And you learn different points of view and perspectives— even if they don’t like to read.

JAROD: I think there’s a lot of value. Both tangible—as far as communications and learning how to read and write. And also applying those same things to the real world.

Were there any hardships or obstacles that you remembered having at UM? How did you manage it?

JAROD: No, well, I am sure there were, but I can’t think of any off-hand. As years go by, you stop thinking about that kind of stuff. When I think of Ole Miss— I think about how I made good friends, met my current wife, and played in bands!

JOSHUA: No way, you played around town?

JOSHUA: Did you play at Proud Larry’s?

JAROD: No, there was a bar called Stanleys— I think it became— is Funky’s still a place?

JAROD: Well right across the street from Funky’s-ish, there was a bar that became a different name. A small little shotgun bar that we would play. There was also a place called the Jubilee—it might still be a place— that was next to where Funky’s is.

The Rooster’s Blues House had just started up when I graduated.

When I think about my time at Ole Miss, especially since my career doesn’t really relate to stuff I did then, I mainly think of Oxford as a cool town with its art, music, and food. That’s oxford to me you know, is the music and food and all of that. I feel like that is what makes it special to me. I don’t think back and think about Greek life—it was all about hanging around on the town square and hanging around the summers when the students were gone.

JOSHUA: Do you remember any of the band names you played with?

JAROD: We were one-off things with friends. We had a good group of musicians. Sometimes we would play during happy hour, sometimes at night. Sometimes we get paid a couple hundred bucks or we would do it for free or for free beer! That was one good thing if you were in the band!