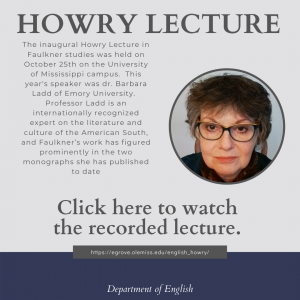 The Inaugural Howry Lecture in Faulkner Studies was held on October 25, 2021.

The inaugural Howry Lecturer is Professor Barbara Ladd of Emory University.  Professor Ladd is an internationally recognized expert on the literature and culture of the American South, and Faulkner’s work has figured prominently in the two monographs she has published to date:  Nationalism and the Color Line in George W. Cable, Mark Twain, and William Faulkner (LSU Press, 1996), and Resisting History: Gender, Modernity, and Authorship in William Faulkner, Zora Neale Hurston, and Eudora Welty (also LSU Press, 2007).  She is also the coeditor of The Oxford Handbook of the Literature of the U.S. South (Oxford University Press, 2016) and the author of dozens of scholarly essays about southern writers.  You can learn more about her publication history at her Emory University webpage, here: http://english.emory.edu/home/people/bios/ladd-barbara.html