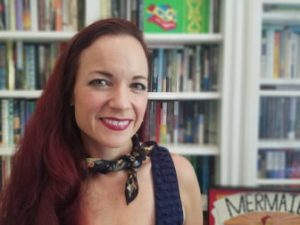 Three volumes of poems, two books of essays, and a book co-authored with her husband has led to Beth Ann Fennelly being named Mississippi’s Poet Laureate.

Fennelly’s selection was announced Wednesday by Malcolm White, executive director of the Mississippi Arts Commission, at the Rotunda of the Capitol Building.  She was chosen from among three finalists submitted to Gov. Phil Bryant by the state poet laureate selection committee.

Although Fennelly submitted an application to be considered for the post, she says her only reaction was to giggle when she found out she had been chosen.

“I’m really tickled, I’m so happy. Even though I knew I was nominated and knew that my application had been progressing through the system, somehow I just didn’t imagine it would happen,” said Fennelly.

A Chicago native, Fennelly, a University of Mississippi associate professor directing the master of fine arts program in the English Department, says it’s an honor to be recognized by a place she loves:

“I feel like Oxford specifically, and in Mississippi in general, reading still matters. It’s still a place where the stories we tell about each others lives influence our lives,” Fennelly said.

Fennelly says she thought she began to think about being a poetess in college, but that turned out not to be the case. At a reading, a person in the audience asked her when she knew she wanted to be a poet.

“I told them the story about being in a great college creative writing class,” Fennely recalled, “and my mom was in the audience, and she raised her hand. And she said, ‘that’s not true Beth Ann, I have a letter you wrote when you were seven saying you wanted to be a poet, p-o-i-t.’”

Now that Fennelly is Mississippi’s poet laureate for the next four years, she hopes to spread the enjoyment she gets from poetry to other people in the state.

She thinks Mississippi is a perfect place to do so with its storied traditions in oral history, literature and music.

“I want to remind Mississippi that poetry can be there in such a rich way, and if I can help spread that message I’ll be very content,” said Fennelly.

She really wants to focus on exposing children to poetry

“I feel like poetry is pleasurable, and children understand because they nonsense rhymes, and they clap, and they like Dr. Suess,” said Fennelly.

She believes that a disconnect for students comes through the way poetry is taught in schools.

“I hate to say it,” said Fennelly.

Some students, she says, are taught that poetry must have a rigid structure.

She notes that people who don’t live in Mississippi like to harp on the state’s negatives while ignoring its rich literary history.

“I want to say, you know what? Most Pulitzer Prize winning authors, best book store in the South, how about we talk about that?” asked Fennelly.

Fennelly was named in 2011 as Outstanding Teacher of the Year at Ole Miss. Among her publications are three full-length poetry books — Open House, Tender Hooks andUnmentionables — and a book of nonfiction (Great with Child). With her husband, Tom Franklin, she co-authored the 2013 novel The Tilted World.