February 13, 2018  |  By Nathan Towery for the University of Mississippi Graduate School 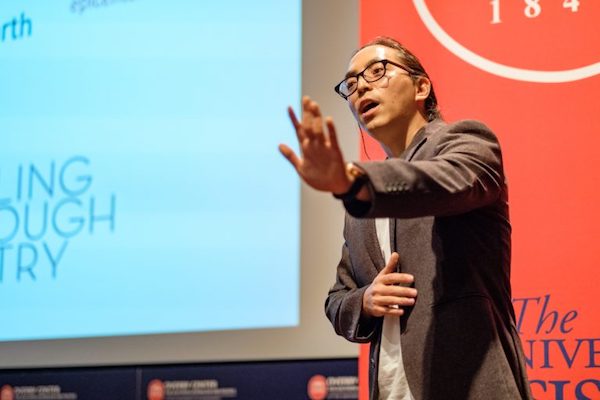 Samyak Shertok presents his thesis, “In the Year of the Earth: Notes from the Epicenter,” at the Three Minute Thesis competition at UM. Photo by Robert Jordan

Every year, the University of Mississippi hosts a Three Minute Thesis, or 3MT, competition. The competition consists of two rounds, during which graduate students are given three minutes to present an overview of their thesis or dissertation. The individual winner from UM goes on to compete at the Conference of Southern Graduate Schools (CSGS) competition.

This year’s individual winner is Samyak Shertok, a M.F.A. candidate in poetry, whose thesis is titled “In the Year of the Earth: Notes from the Epicenter.”

Shertok’s thesis is a collection of poems centered around the 7.8 magnitude earthquake that shook Nepal, his homeland, and killed nearly 9,000 people on April 25, 2015.

“At the time, I was working as a visiting poet at the Mayo Clinic. Three days a week I’d visit the palliative-unit patients and write poems for them as lyric medicine,” Shertok said.

Through his work at the Mayo Clinic, Shertok has seen firsthand the healing power of words. Therapists around the world are beginning to use poetry as an effective tool in coping with mental illness.

“No wonder the word ‘therapy’ comes from the Greek word ‘therapeia,’ which means to nurse through song, dance, poetry and drama,” Shertok said.

He started the project “Healing Through Poetry: Nepal Earthquake Relief,” based on the idea that “if words can hurt us, they can also heal us.” In 2016, he visited Nepal to use the power of words firsthand. He visited the devastated areas and spoke with survivors, for whom he then wrote poems.

His thesis and collection of poems were born from his 2016 visit to Nepal.

“These poems are love letters from a son to his motherland, who could only watch from afar as his home got decimated,” Shertok said. “Through these love notes, I’m trying to say, ‘Dear Himalayas, I won’t be able to bring back your sons and daughters, but I can write a song that will remember them. In this song, they are still breathing. In this song, you can almost touch their hands.’”

Shertok will go on to compete at the CSGS competition in Fayetteville, Arkansas, in February. Jessica Heppard, the previous representative for UM, told him to “take it easy and to not let it get over (his) head.” Shertok will use these words as sound advice as he prepares for the next level of competition.

Upon graduation, Shertok plans to create a book-length collection of his poems. He said he is interested in recognizing his poetry as witness.