Ralph Eubanks to Serve as Visiting Professor at UM

Alumnus and author will teach courses in Southern studies and English 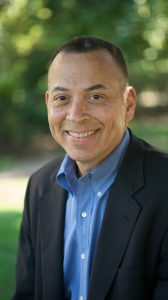 OXFORD, Miss. – Author and journalist Ralph Eubanks returns to the University of Mississippi this fall, this time as a visiting professor. The Mount Olive native will teach a Southern studies course this fall and an English course during the spring semester.

His Southern studies course, SST 598: Special Topics, examines the American South through the art of photography as well as through the work of writers who have found their inspiration in photography. James Agee and Walker Evans’ “Let Us Now Praise Famous Men” will serve as a foundational work to examine ways the visual record of the American South is tied to writing about the region, including novels, poetry and journalism, particularly magazine journalism of the 1960s in magazines such as Life and Look.

What connects the reading for this course – and will be the focus of class discussions – is how authors turn to photographs as a way to tie together the region’s visual and verbal traditions, Eubanks said.

“I spoke at the center last year about the work of Walker Evans and James Agee and the impact it was having on my own writing about the Mississippi Delta,” he said. “At the time, I was teaching a class of photography and literature at Millsaps College, but I realized at the end of the class that I spent a great deal of time focused on the South.

“So when I was asked to teach at Ole Miss, I decided to adapt that class to focus exclusively on the South.”

Eubanks said he hopes students will learn how history is embedded in visual images, as well as how to read a photograph.

“Photographs are time capsules of history and can tell us a great deal about how the people and places captured in them,” Eubanks said. “Also, I hope they will see how photographs can be a testament to the relentless melting of time.

“As Susan Sontag said, all photographs are ‘memento mori’ (a Latin phrase meaning ‘remember that you have to die’). A photograph captures another person’s – or a place’s – mortality, vulnerability and mutability.

“I’d like my students to think about how the visual image of the South has evolved over time and reveals time’s impact on the landscape as well as how visual images both crush – and reinforce – Southern myths.”

Second-year Southern studies master’s student Holly Robinson enrolled in the course because she thought it would be a good way to brush up on her image-analysis skills ahead of her thesis research.

“I’m a popular culturist, so I enjoy looking at visual imagery more than books because there’s a lot more to say about an image, and things aren’t as concrete, so you can be really speculative in your analysis, which always leads you to a more interesting idea-place,” Robinson said.

Eubanks’ class for the English department is “Civil Rights and Activism in Literature,” which is slightly different from a class he taught at Millsaps. It will examine works of literature that turn their focus on the image, life and reality of black life during the civil rights movement as well as in today’s second wave of activism.

“One change this time is that I am teaching Richard Wright’s ‘Native Son,’” Eubanks said. “I believe that Richard Wright’s work, particularly the social realism of his work, deserves a re-examination.”

Eubanks is the author of “Ever Is a Long Time: A Journey Into Mississippi’s Dark Past” (Basic Books, 2003), which Washington Post book critic Jonathan Yardley named as one of the best nonfiction books of the year. He has contributed articles to the Washington Post Outlook and Style sections, the Chicago Tribune, Preservation and National Public Radio.

He is a recipient of a 2007 Guggenheim Fellowship from the John Simon Guggenheim Foundation and has been a fellow at the New America Foundation. He is the former editor of the Virginia Quarterly Review at the University of Virginia and served as director of publishing at the Library of Congress in Washington, D.C. from 1995 to 2013.

Last year, he was the Eudora Welty Visiting Scholar in Southern Studies at Millsaps College in Jackson.

Eubanks, who received his bachelor’s degree at UM before earning a master’s degree in English language and literature at the University of Michigan, is looking forward to spending an extended amount of time on the Ole Miss campus.

“Although I spend a great deal of time in Oxford, it is different being a resident of the university community and being a visitor,” he said. “I’m looking forward to being a part of the community for a while.

“Plus, this academic year is exactly 40 years after my senior year at Ole Miss, which was the last time I spent an extended amount of time on campus. It’s good to come full circle.”