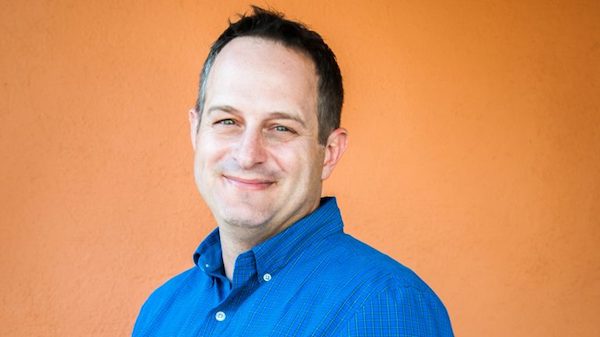 The product of 10 years of work and a lifetime of observations, “Exploded View: Essays on Fatherhood, with Diagrams” is immensely important for author Dustin Parsons, partially because it’s his first book, but also because it’s about his own father and his own experiences as a parent.

A book launch and signing for the volume, published in March by the University of Georgia Press, is set for 5 p.m. Tuesday (April 10) at Off Square Books in Oxford.

Parsons, a University of Mississippi senior lecturer in English, holds a Master of Fine Arts in Creative Writing from Bowling Green State University. The work grew out of his own worries about fatherhood, which makes his connection to the book deep and particularly meaningful, he said.

“My dad was the peak, in many ways, of what I thought a father was supposed to be,” said Parsons, who joined the Ole Miss faculty last year. “He supported us, suffered some jobs he’d frankly rather not have had, and still had something in the tank for us after such long days in the Kansas oilfields.

“I guess this book was trying to figure out how to do that too, but with a completely different kind of life.”

The book uses “graphic” essays, a nonconventional way of telling a life story, and the illustrations and text work together in print. Much like a graphic novel, the narrative is formed not only through text, but in the way the text works with the many images that accompany it.

Parson’s father was an oilfield mechanic, as well as a woodworker, auto mechanic, welder and artist in his spare time, so diagrams were everywhere during Parson’s childhood. His father, Max Parsons, had diagrams all around his shop, including manuals that had “exploded views” of parts, that Parsons was constantly studying.

His father always had a visual guide to help him perform any task, from rebuilding a transmission or putting together a diesel engine to assembling a baby cradle. In “Exploded View” Parsons uses his father’s approach to understanding the man himself, as he navigates his own life as he raises his two young, biracial sons.

He said his wife, poet and essayist Aimee Nezhukumatathil, was immensely supportive on his literary odyssey through parenthood.

“We are a house full of writers and we do a good job of trying to give each other time to write, but without her support and help, I’d never have finished the book,” Parsons said. “She was always there reminding me that what I had to say was important.

“Most of the early ideas about how the images fit into the essays were her suggestions. It really wouldn’t be a book without her encouragement and support along the way.”

Ivo Kamps, UM chair of English, said the department congratulates Parsons on his work. The university is also fortunate to have someone the caliber of Parsons teaching its students, he said.

“Dustin is an extraordinary writer as well as a superb and dedicated teacher of literature and creative writing,” Kamps said. “He has taught large-lecture sections of the American literature survey and upper division contemporary literature classes.

“His students appreciate his expertise and infectious enthusiasm for his subject. His new book with Georgia University Press is a truly original collection of poetic essays accompanied by many intriguing and wonderful illustrations.”