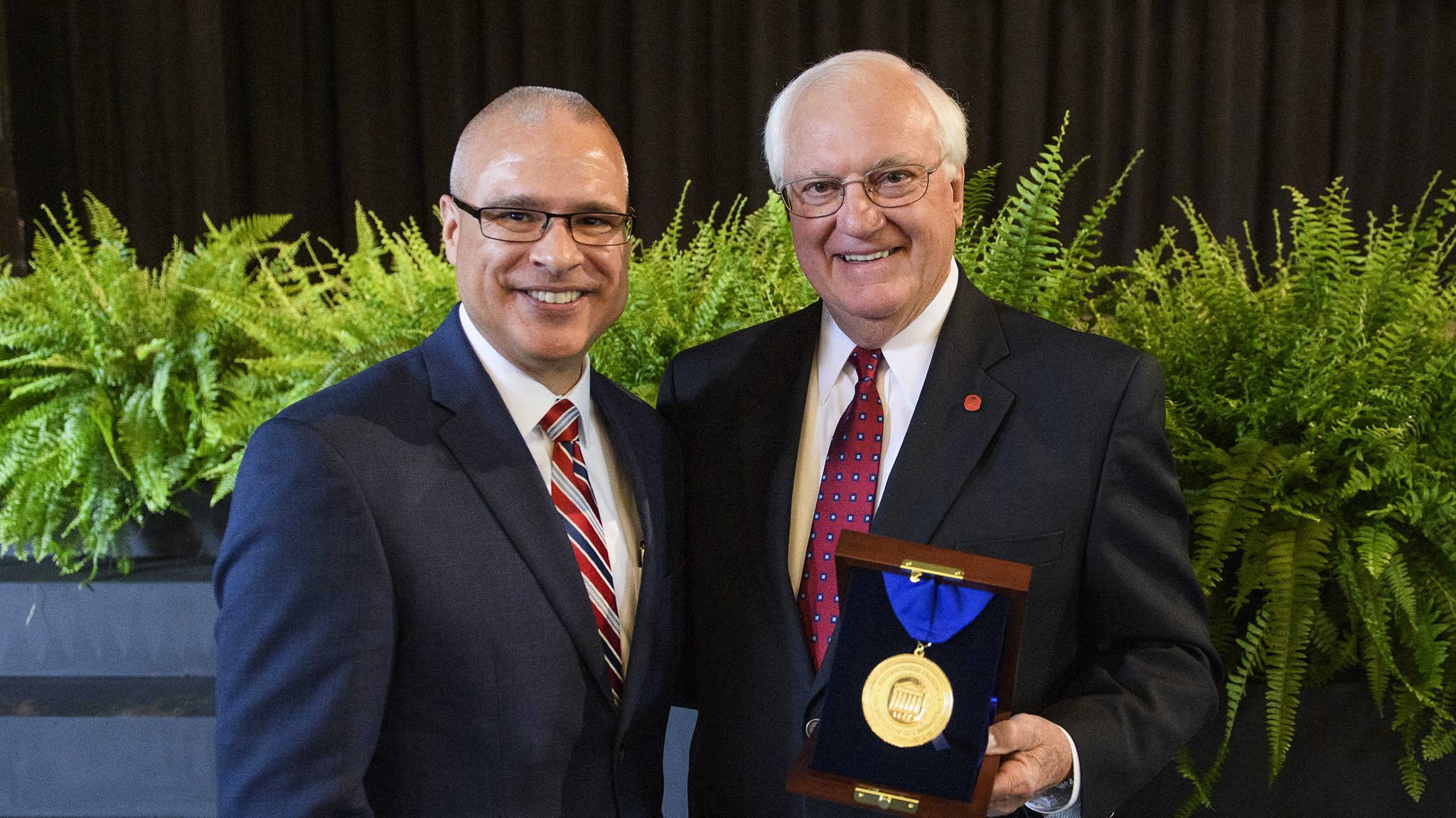 UM Provost Noel Wilkin (left) congratulates Charles Hussey, associate dean for research and graduate education in the College of Liberal Arts and professor of chemistry and biochemistry, on being named a Distinguished Professor during the end-of-the-semester faculty meeting Friday (May 10) in Fulton Chapel. Photo by Thomas Graning/Ole Miss Digital Imaging Services

OXFORD, Miss. – Three University of Mississippi professors – with a combined more than eight decades of service to UM – were appointed Distinguished Professors during the end-of-the-semester faculty meeting Friday (May 10) in Fulton Chapel.

The Distinguished Professor appointment is an honorific title started by UM in 2018 that recognizes the best faculty with sustained excellence at Ole Miss. The award was created in response to the university’s strategic initiative to develop a post-professorial recognition.

“The ways in which professors Hussey, Raber and Repka have shaped their disciplines and influenced the world is amazing, and they are very deserving of this award.”

Hussey joined the faculty in 1978 after receiving a bachelor’s in chemistry in 1971 and his doctorate in analytical chemistry in 1974, both from UM. Before joining the Ole Miss faculty, Hussey served a four-year active duty term as a chemical research officer at the U.S. Air Force Academy’s Frank J. Seiler Research Laboratory and as a lecturer in the Department of Chemistry and Biological Sciences at the academy. He retired as a lieutenant colonel in the U.S. Air Force Reserve in 1994.

For four decades, his research has focused on the electrochemistry and transport properties of ionic liquids and molten salts. He has authored or co-authored more than 175 refereed journal articles, book chapters, patents and technical reports, and his research has been supported by the National Science Foundation, the Air Force Office of Scientific Research, the U.S. Department of Energy and more.

He was elected as a fellow of the Electrochemical Society in 2003 and selected as an emeritus member in 2017.

He also has directed 25 dissertations and theses during his UM career and taught courses ranging from General Chemistry to Fundamentals of Electrochemistry.

“Professor Hussey has been passionately serving the University of Mississippi for four decades,” wrote Greg Tschumper, chair and professor of chemistry and biochemistry, in his letter of support to Hussey’s appointment. “His research has brought national and international recognition to our institution. He has continually fostered the growth of everyone around him through extraordinary service and leadership.

“His scholarly activity, leadership and service epitomize the very essence of the title of Distinguished Professor.” 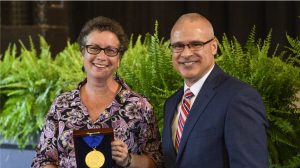 Raber joined the faculty in 1995 after earning a bachelor’s degree in English from Yale University and her doctoral degree in literature from the University of California at San Diego. She specializes in Renaissance literature with an emphasis on ecostudies, animal studies and posthumanist theory.

Raber has written three monographs, including “Shakespeare and Posthumanist Theory,” which was published last spring. She also is the author of “Animal Bodies, Renaissance Culture” (University of Pennsylvania Press, 2013), a finalist for the 2015 Association for the Study of Literature and Environment Book Award, and “Dramatic Difference: Gender, Class and Genre in the Early Modern Closet Drama” (University of Delaware Press, 2001).

She is the author of more than 30 articles and book chapters and co-editor of several other works.

On June 1, 2018, Raber assumed the position of executive director of the Shakespeare Association of America, a national organization dedicated to the work of William Shakespeare that is based on the Ole Miss campus. During her time as a professor, Raber has taught courses such as Survey of British Literature to 18th Century, Shakespeare and Survey of World Literature to 1650.

“Dr. Raber is a world-class scholar as well as a distinguished teacher and an invaluable contributor to our department, the university and the profession of literary studies,” wrote Jay Watson, acting chair of the Department of English in the fall of 2018, and Ivo Kamps, the department chair who was on leave in fall 2018, in their letter of support to Raber’s appointment.

“As one may surmise from the rigor, energy and creativity on display in her scholarship, Dr. Raber is also an extraordinary and charismatic teacher,” the duo wrote. “She is popular with students and is as much at home in a large lecture section with 120 sophomores as she is in a highly specialized and focused graduate seminar for Ph.D. students.” 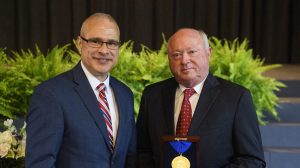 UM Provost Noel Wilkin (left) congratulates Michael Repka, chair and professor of pharmaceutics and drug delivery and director of the Pii Center for Pharmaceutical Technology, on being named a Distinguished Professor during the end-of-the-semester faculty meeting Friday (May 10) in Fulton Chapel. Photo by Thomas Graning/Ole Miss Digital Imaging Services

He has more than 150 peer-reviewed publications in prestigious pharmaceutical journals, over 330 peer-reviewed abstract presentations and more than 70 invited speaker presentations and workshops, and holds seven patents. He is editor of the American Association of Pharmaceutical Scientists PharmSciTech journal and associate director of the Journal of Drug Delivery Science and Technology.

Repka is known for his pioneering work on hot-melt extrusion to produce pharmaceutical dosage forms. His research has been funded by the U.S. Food and Drug Administration, National Institutes of Health, National Science Foundation and more.

He has advised 32 Ph.D. graduates and taught courses such as Basic Pharmaceutics II and Product Development.

“Many of his former students have gone on to meaningful careers in well-placed positions, thus contributing to the training and education of the next generation of pharmaceutical scientists,” wrote John Bentley, professor and chair of the Department of Pharmacy Administration and 2018-19 chair of the School of Pharmacy Distinguished Professor Advisory Committee.

“(He) has served as a successful mentor (to) several faculty members. … His service to the field of pharmaceutics is very noteworthy.”

The three professors were officially recognized during the spring faculty meeting. No more than 5 percent of eligible faculty can be appointed as a Distinguished Professor.

Each school and college has its own guidelines for nominations, but the university requires that nominated faculty have at least six years of service at the highest rank of professor, along with exemplary accomplishments in research and creative achievement, teaching and service. Also, it is expected that awardees will have achieved a significant degree of national or international recognition.

The recommended appointment nominees are made by a committee chosen by the Faculty Senate and the provost, and the committee has representatives from across campus.