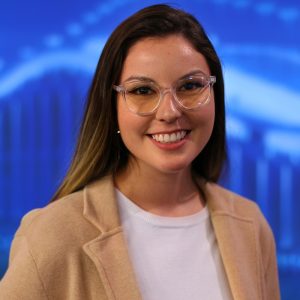 With a major in Journalism and a minor in English, Liese was excited to win a Producer in Residence Fellowship at WLOX-TV in Biloxi, an opportunity she learned about through one of her teachers, UM Journalism professor, Dr. Debora Wenger. After only three months in the fellowship, Liese became a full-time Digital Producer for WLOX, a position in which she has thrived.

“Being a digital producer involves managing the station’s online presence,” explains Liese. In addition to coordinating the station’s social media, including the communication of breaking news over its social-media platforms, Liese has had the opportunity to work on the newscast side of things as well. “I’ve written scripts for the anchors, edited video, and stacked shows,” which means “figuring out what will top the show, fill the show, and end the show.”

Liese laughs when I ask if she always wanted to be doing this work, which she clearly enjoys. She says that the best part of the job has been her total immersion in the world of fast-breaking news, an arena in which she hadn’t imagined herself working while taking classes at UM. Liese fondly recalls her favorite English classes: courses about poetry and creative writing classes. As a Journalism major, she tended to prefer the human-interest side of the news, her favorite projects being those in which she had the chance to talk with interesting and creative people in Oxford’s artistic community. Compared to her relatively low-key days as an undergraduate, her experiences at WLOX have been eye-opening and invigorating. She loves “the adrenaline rush” of following a lead, which she says can come from a variety of places, including tips from viewers with whom she interacts on social media. Recently, for example, she helped report a story of a massive 60-acre fire after receiving a lead from Facebook.

Despite all the talk these days about distrust of the media, Liese’s experience working in the news has helped her to see how much people rely upon their local news, especially when it comes to questions impacting public safety and the local environment. A case in point, during the pandemic, she is often fielding Covid-19 questions on the station’s social media platforms. Addressing those questions might involve directing people toward the best sources of Covid information, such as the CDC, or providing the phone number of a local hospital.

As much as she has enjoyed her work as a digital content producer, Liese is embarking on a new experience this fall, when she begins a graduate program at the E.W. Scripps Journalism School at  Ohio University.  With a research assistantship in hand, she will pursue a course of study in Native American social issues under the supervision of Dr. Victoria LaPoe, former Vice President of the Native American Journalist Association.

Liese is Navajo and Chippewa-Cree herself, and explains, “Native issues are something that I want to learn more about, so that I can help share the important stories impacting Native communities. We make up such a small percentage of the population, and as a result our voices too often go unheard.” She cites recent reporting on the impact of COVID-19 on the Navajo Nation as a positive stride towards acknowledgement and inclusion. This is where she ultimately would like to make a difference, first as a reporter but eventually, she hopes, as a documentary filmmaker.

You can take the student out of the English program (when she graduates!), but you can’t take the love of poetry from the former student. In addition to wanting to hone her filmmaking skills, Liese says she’d like to continue working on her poetry as well. Among her pastimes these days is writing poetry on Native topics. “Eventually, I would love to see my work in well-established journals and magazines,” Liese smiles, “but don’t we all?”