An Officer & a Shakespeare Fan 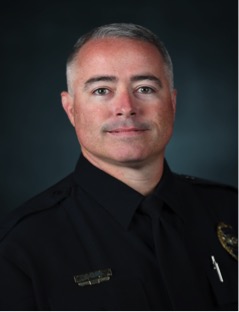 Bishop Lewis (B.A. 1999) is full of surprises. A police officer with a love of Shakespeare and Bonsai trees, he is a blogger and a “comma cop” as well as UM’s Crime Prevention Coordinator. How did this former English major end up in such a high-profile position on the campus he loves? Lewis’s father was a police officer, so it was a career path the Oxford native often thought about during his undergraduate years. He strongly considered pursuing a doctorate in English before choosing the career he likes to say “runs in his family.” Things worked out well for Lewis, whose position at UM involves being an educator as well as a police officer.

Looking back on his own education, Lewis credits his high school teachers for fostering his passions for reading and writing, and it didn’t hurt to grow up in literary Oxford, in the shadow of Rowan Oak. Lewis and his brother were raised by their father, who liked to bring his boys to the Rowan Oak woods. “I have fond memories spending hours playing in those woods,” says Lewis, who went on to study Faulkner when he got to UM. In addition to studying Oxford’s favorite bard, he enjoyed more contemporary fiction classes as well as seminars in Shakespeare and early-modern literature. His favorite English professors were writer, David Galef, and Shakespeare scholar, Karen Raber, whose graduate classes in English Literature were among the highlights of Lewis’s education. (Yes, you heard that right, the University of Mississippi’s Crime Prevention Coordinator took graduate level English Lit. classes when he was only an undergraduate!) Lewis also enjoyed studying Romanticism as well as environmental poetry.

Although he has worked in law enforcement for over two decades, in his current role Lewis finds himself relying on his English education more than ever before. 90% of his job involves following in the footsteps of the effective teachers he admired as a student. Today, Lewis teaches classes on crime-prevention subjects to a range of university constituents, including student groups and academic departments. Giving roughly 200 talks per year, his classes cover such subjects as personal safety and active-shooter training. Teaching has become the favorite part of his job. He jokes that he’d rather run his mouth than run after bad guys.

Prior to serving as the university’s Crime Prevention Coordinator, Lewis worked as a campus policeman. In these roles, Lewis explains, having an English degree proved to be a valuable asset. “My degree has certainly benefited me over the years,” Lewis reflects, “When I was an officer, my supervisors never had to worry about how well written my reports were. They always approved my reports and never made much fuss over them. When I became a shift supervisor, it was easy for me to proof and help edit other officers’ reports. People called me ‘the comma cop’. I like to think that I made others better writers.”

So what does a Shakespeare-loving comma cop do when he’s not improving safety on campus? He cultivates Bonsai plants, of course. Lewis is a Bonsai enthusiast and a master cultivator. He first became interested in Bonsai in 2014, when his wife brought home a plant from Walmart. Although Lewis was an avid gardener at the time, he did a poor job with his first plant, which “died almost immediately.” “Bonsai is an interesting hobby,” he explains, “because it really tests your ability to keep plants alive.” He loves that this hobby promotes patience, and says that Nature works at its own pace. “It’s a pace we’re not used to in this modern world.”

When he’s not working with members of the UM community, Lewis is out and about in Oxford. He enjoys teaching friends, neighbors, and other gardeners about the art of Bonsai. It was this impulse to cultivate not just Bonsai but also community that led him to create bishopsgarden.net,  where he regularly blogs about his gardening experiences. What is the most fun he’s had on these outdoor adventures? That’s easy: it’s gardening with his daughter. “She doesn’t have her own bonsai tree yet, but she helps me with mine and I’ve shown her how to care for them. It’s a nice activity to share with family.”